There is a critical lack of information about the location and extent of deep-water ecosystems and seabed habitats for about a third of the Great Barrier Reef World Heritage Area that lies deeper than 200 m. In addition much of the inter-reef (between reefs) seabed shallower than 100 m on the Great Barrier Reef shelf, and for many of the shallow coral reefs themselves, have never been adequately mapped using modern echosounder techniques. 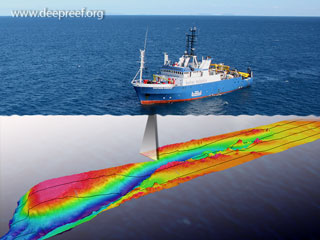 In recent years there has been a vast increase in the coverage of digital depth data obtained in the Great Barrier Reef and Coral Sea through a series of research vessel ocean mapping expeditions using multibeam sonar. Combined with the latest singlebeam echosounder data, satellite remote-sensing and lidar bathymetric survey results, Project 3D-GBR was started in 2009 to develop a new high-resolution depth model for the Reef and adjoining Coral Sea.

The gbr100 grid will help inform the Marine Park managers on where the key seabed features in the deep Great Barrier Reef are, and how well the current network of zoning protects the range of seabed habitats. Marine scientists require detailed depth maps for modelling ocean currents, tsunami impact and storm surge inundation along the coast, and for understanding ecosystem and biodiversity patterns on the seabed.

The project was funded through a Queensland Smart Futures Fellowship awarded to Dr Robin Beaman, with matching funds provided by the Reef and Rainforest Research Centre and James Cook University. Project partners include staff from the Australian Institute of Marine Science, Geoscience Australia, CSIRO Marine and Atmospheric Research and Queensland Dept of Agriculture and Fisheries.

Much of the bathymetry data for the project are provided by the Australian Hydrographic Service using Royal Australian Navy hydrographic survey data collected over many years. Collected primarily for navigational safety, these survey datasets are a vital source data in the new 3D depth model. The project partners gratefully acknowledge the assistance of the AHS and RAN staff to the project. 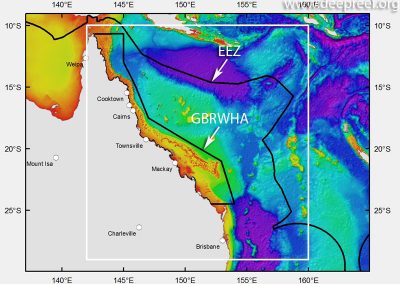 The calcareous green alga Halimeda is a major contributor to inter-reef carbonate sediments and is found along the...

Submarine canyons are among the largest undersea landscape features on Earth, and act as pathways for most of the...